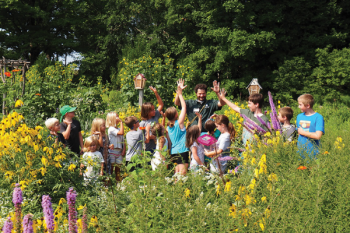 On the site of the former Northern Michigan Asylum, a unique community asset exemplifies the healing powers of nature and art. With the support of a $50,000 Rotary Charities Assets for Thriving Communities grant, The Botanic Garden at Historic Barns Park plans to transform a 1900’s era dairy barn into an education center and develop a children's sensory garden, projects that embody the “beauty is therapy” ideal that guided the institution which shaped the land.

“Time spent in nature is just good for us as human beings.”

The Botanic Gardens at Historic Barns Park opened to the public in 2014 after a decade of careful planning and community support that resulted in renovations of an 1886 stone-walled granary into a bright and beautiful visitors center. Nearly 130 years earlier, the Northern Michigan Asylum admitted its first patients in 1885 under the supervision of Dr. James D. Munson. The institution, at the time one of only three state psychiatric hospitals, employed an innovative and unique method of care. The beautiful Victorian-Italianate style architecture and manicured gardens reflected Munson’s theory of “beauty is therapy”, the thinking that patients' ailments would be improved if surrounded by peace and beauty, and given meaningful work and purpose.

Self-sufficiency was an ideal of the institution. Also known as the Traverse City State Hospital, it was the first state hospital to begin producing its own power, and rail was built to transport coal from the docks to the plant. Over 600 of the nearly 1,600 acres were dedicated to agriculture, where patients helped to produce fruits, vegetables, grain, dairy, and meat for the hospital’s patients and staff. Having grown up on a dairy farm, Dr. Munson recognized the importance of maintaining a healthy herd, and in 1900 a state-of-the-art brick dairy barn was built to replace small wooden barns. In 1989, after more than two decades of decreased federal funding and action aimed at deinstitutionalization, the Traverse City State Hospital discharged its last patients and closed its doors. The farm preceded the closure of the hospital, ceasing production in 1950.

“The history of this site has meaning to our region,” said Helen Grove, board member of The Botanic Garden. In 2003, the Garfield Township Recreational Authority acquired the farm property and began urgent work to preserve the structural integrity of the brick barns, now known as the Cathedral Barn and the Historic Barn. The nonprofit Botanic Garden was granted space and management rights to 26 acres of the property, and now holds those rights in perpetuity. After years of planning, several large-scale projects to modernize the barns, and a $1.5 million joint capital campaign, The Botanic Garden’s Visitor Center opened its doors in the farm’s old granary building.

Once the Visitors Center was opened, work shifted to building the beautiful and unique gardens characteristic of the property. “This land had lain fallow for 60 years,” said Grove. Volunteers were mobilized to work the land and remove invasive plants that had encroached on the former farm fields. A pivotal moment for The Botanic Garden came when a nationally renowned landscape architect was hired to develop a comprehensive site plan. “Every botanical garden has its unique interests and features. Ours reflects the history of the site, highlighting and incorporating elements of what was there before,” said Grove. The foundation of one grain silo is now a conversation circle and another has been incorporated in a three-tiered fountain. The flower beds of the Walled Garden, a prominent feature of the grounds, are laid out in the footprint of the horse stalls that once stood there. Cast iron buckets used to water the cows now serve as light fixtures in the classroom of the Visitor Center, shedding light on the rich history of the site.

A guiding philosophy of The Botanic Garden is to remove the physical and financial barriers that may prevent someone from enjoying the gardens. “We don’t have fences, and we don’t charge admission,” said Grove, noting that The Botanic Garden are a unique community asset in Northern Michigan. Many gardens around the country charge admission fees and have a very formal feel. It can be easy for people to feel that a botanical garden is not a place for them.

“The Farm was developed to support the hospital and its people. An emphasis of The Botanic Garden, in its design and programming, is on health and healing,” said Grove. The Botanic Garden offers a wide range of classes and events throughout the year, from gardening classes, to nutrition and cooking demonstrations, to yoga for all ages - often offered free of charge. The new Education Center in the renovated dairy barn marks the next big step for the nonprofit. They’re currently limited in the number and size of classes they’re able to offer by their classroom space. The expanded space, which will include additional classrooms and a demonstration kitchen, will allow the nonprofit to expand its programming and increase the number and size of classes and events it can offer each year.

In addition to the build-out of the Education Center, the Botanic Garden is moving forward with another phase of its master site plan: a Children’s Sensory Garden. Serving the needs and interests of children and young visitors has been a key focus of the nonprofit since its inception. “Our programs are meant to educate people of all ages and abilities. As we created the garden plans, we paid special attention to people of differing physical abilities,” said Grove. This commitment to people of all abilities is reflected in the design of the Children’s Sensory Garden, which features elements with specific emphasis on children with special needs. Children who struggle to process too much sensory information can find respite by sitting apart from the action to be quiet for a time. Large flat rocks will accommodate wheelchair access to a water feature that rolls through the garden. Design features of the garden will make it easier for children with low vision to navigate safely. “Time spent in nature is just good for us as human beings…This garden is designed to help kids develop an appreciation for the remarkable natural environments we enjoy in Northern Michigan,” said Grove. “We like to say we’re raising tomorrow’s generation of environmental stewards.”

One of the most remarkable things about The Botanic Gardens at Historic Barns Park is the generous community support and volunteer effort that has brought it to fruition. Over 300 volunteers have invested their time and labor, from the early days of clearing the overgrowth to the teams that care for each of the gardens. The volunteer maintenance crew, lovingly referred to as “The Possums”, do all the mowing and trimming, installations and repairs. Volunteer docents give tours to visitors, free of charge, and help with special events. “Visitors from other public gardens come here and are awestruck that this was done by volunteers,” said Grove.

With thousands of volunteer hours, financial support from their members and donors, and a $50,000 Rotary Charities Assets for Thriving Communities grant, The Botanic Gardens at Historic Barns Park is guided by an abiding commitment that it is a place for everyone. “The Garden does well well if each time people come, they go away with something meaningful to them.”