Save, Preserve, and Grow The Garden 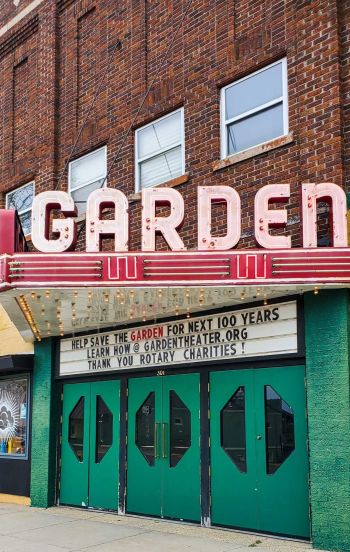 Downtown Frankfort would feel very different if a group of locals had not purchased the dilapidated Garden Theater back in 2009, preventing the site's redevelopment into condos. The Friends of the Garden Theater has been awarded a $50,000 Assets for Thriving Communities grant to support major renovations to improve and preserve the building. Now, they are poised to save the single-screen theater as a community gathering space, ensuring generations of memories to be made.

The Garden Theater was built in 1923 and opened its doors in downtown Frankfort in August of 1924. Those first movies were black and white silent films, and "talkies" made their way to the screen over time. At that moment in history, movies were novel entertainment, and "movie houses" or sometimes "movie palaces" were the center of their communities. Still today, The Garden Theater anchors the lively downtown and brings movie-goers to the coastal town of Frankfort not only to enjoy a film but to spend their dollars throughout the community.

The Garden has had "five or six" private owners since 1923, including Ashland Theater Company, which owned and operated dozens of theaters throughout the midwest. "Towns that have lost their theaters really struggle to keep their downtown vibrant," says Rick Schmitt, chair of The Friends of the Garden Theater. Rick was one of two couples who together purchased the Garden from its previous owner of 25 years, who planned to demolish the deteriorating historic theater and build condos on the corner of Main and 3rd Street. After three years of negotiations, word got out about their effort to save The Garden Theater. The community stepped up to help, forming a community-based ownership company held by 15 couples.

"There is zero money to be made by a single-screen theater in a seasonal town," says Schmitt, underlining the theater's fundamental operating goal just to break even. He also points out the challenges and expenses of addressing the deferred maintenance that threatens the buildings' structural integrity. "It's hard to catch up to a nearly 100-year-old building." Bringing the Garden into the modern age has been a community effort. A group of artists rallied and volunteered to restore the art deco-style painted panels that hang throughout the theater. When film reels began to be replaced by new technology, supporters covered the cost of the digital projection equipment needed to continue showing new films. Over the 12 years that the community-based ownership company owned the theater, $600,000 has been invested in the building, including new heating and cooling systems, ongoing plumbing fixes, and all-new seats, including those that had been damaged by years of water leaking through the roof. 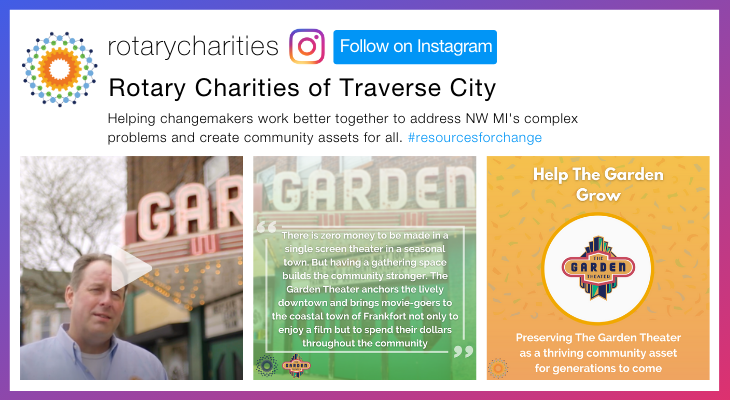 And that's where the group ran into their biggest problem. When the owners of the Garden were investigating the installation of solar panels on the roof, they were advised that not only could the current structure not support the weight of the equipment but could barely hold the weight of significant snowfall. They would heat the building just to melt the snow and prevent the roof from falling in. Repairing the roof will require a complete structural repair, including replacing the wooden supports with steel beams and concrete pilings. Now, they need to bring the entire building up to code, planning to rewire most of the electrical (which is largely still original), install a fire suppression system (which did not exist in 1923), and renovate the bathrooms to meet occupancy and ADA standards.

In December of 2020, the community-based ownership company sold the building to a newly formed nonprofit organization, The Friends of the Garden Theater, which will bring year-round, diverse entertainment, personal enrichment, and community gathering space to enhance people's lives in our region. "Having a gathering place downtown builds the community stronger," says Schmitt, who firmly believes that the Garden Theater should be preserved as a community asset where generations of locals and visitors can make memories.

The theater has a rich history of bringing the community together and hosts many events beyond showing movies. Community meetings, school events, weddings, concerts, and live dance and theater performances will bring the space to life, supported by the Friends' plans to improve the theater's stage to accommodate the needs and desires of the community. "We also want to restore the marquee, which is about 70 years old," adds Schmitt, who says they'll completely retrofit the power supply, replace some of the neon tubes and install a plexiglass shield to protect the historic lights. Construction is set to begin this summer.

Looking forward, Schmitt speaks with excitement about the opportunities in store for The Garden, including collaborations with local theaters, the Michigan Council for Arts and Cultural Affairs (MCACA), the Oliver Arts Center, Interlochen Center for the Arts, and organizations that share its mission of supporting arts and culture in Northern Michigan. But first, they'll need to reach their goal of raising nearly $2 million, of which they're in the final $100,000 stretch.

Rotary Charities is proud to support The Friends of the Garden Theater and their efforts to save, preserve and grow the theater with a $50,000 Assets for Thriving Communities grant. Visit www.frankfortgardentheater.com/donate to learn more about the theater and support their work.