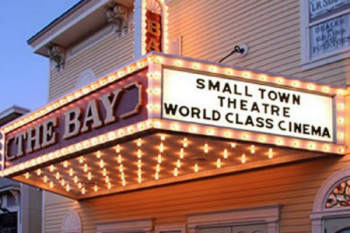 In the harbor village of Suttons Bay, an intrepid group of volunteers is working to make vital updates to a historic landmark while preserving the unique character of The Bay Community Theatre. With the support of a $50,000 Rotary Charities Assets for Thriving Communities grant, the nonprofit plans to replace outdated and crumbling infrastructure and provide engaging experiences for the community with a keen interest in accessibility and affordability.

“Our mantra was ‘Keep the lights on.’”

For more than 70 years, The Bay has been a gathering place for the community to enjoy movies and live events. Built in 1920 with lumber from nearby Elmer Peterson Sawmill, the building was originally Hansens Brother’s Hardware, subsequently a livery business, and the village’s Volunteer Fire Department. In 1946, after standing empty during WWII, the building was renovated and transformed into a movie theater by Bion Rockwell. The theater was later owned and operated as a for-profit business by the Klinefelter family for 15 years, and most recently by the Bahle family since the late-70s.

In December 2018, the Bahle’s announced they would close the theater by the end of the year. “It was December 11. I’ll never forget that day,” said Rick Andrews, Board President of The Bay Community Theatre. “Almost instantly, a group of community members got together to talk about the possibilities and how to save the theater. We thought, ‘We don’t have much time, and we don’t have a lot of money. But we have the passion and we have the people.’” A week later, paperwork was filed with the State to establish the group as a nonprofit, and an agreement was reached with the Bahle’s to operate the business and lease the building. “We decided that we would do everything this we can to keep the lights on, and whether we know how to or not, we’d show a movie on New Years Day.” said Andrews.

The Bay Community Theatre is operated by a nearly all-volunteer force who have rallied to renovate the building, run concessions, and guide the theater towards success through some of the toughest times. Since their first movie in 2019, the group was able to keep the theater open every day until March 2020. During a three and a half month period when they were forced to close in the early days of the pandemic, the group’s commitment to the theater remained strong. Volunteers mobilized, using the quiet days to do restoration work with small groups socially distanced. As some restrictions eased, the theater opened in the summertime, screening classic films while Hollywood studios held back from releasing new movies. After having to close again in Fall 2021, the theater has remained open since May 2021.

“We’re now at an important pivot point for this organization and place,” said Andrews. “We started out in ‘save this place’ mode. Now we’re financially stable and we continue to figure out how to live through the pandemic. We’ve saved this nostalgic theater, now let’s make it better and more impactful for the community.”

“This is a really cool space with so much potential,” said board member Cheryl Hutchinson. She has history in the village of Suttons Bay, and believes “community theaters like this can be the soul of a village,” a sentiment shared by supporters of the Garden Theater in Frankfort, which received an Assets for Thriving Communities grant in Spring of 2021. With a three-year vision informed by community input, the board is committed to three “focus areas of thriving”: enhancing the theatre experience, growing community engagement, and building a team with strong governance.

The Bay intends to partner with other local groups, including arts & culture organizations and local schools, to provide entertainment, cultural, and educational opportunities. “We’re working with the local schools to provide the theater as a venue for learning and collaborating with teachers to fulfill curriculum requirements. The reception has been very positive,” said Hutchinson. “We also want the theater experience to be accessible and inviting to families.” Andrews echoed that intention, noting that when “you’ve got three or four kids, and they all want popcorn, a night out at the movies can get expensive. We are working on creating programs that are more affordable, and can provide a lot of joy and relief for families.”

The Bay Community Theatre is living up to its unofficial manta and mission, backed by a committed community of volunteers. Almost every day of the week, movie-goers can see a film, ranging from family-friendly animated movies, to thrilling Hollywood blockbusters, to nostalgic classics and foreign films. Andrews shared that he’s looking forward to patrons walking in and being able to see the tangible progress. “It’s really exciting to go from just keeping the doors open to being able to make this place better than ever.”